Some highlights that we are tracking at the City Commission this Monday June 27th 5:30 pm, City Hall Bozeman | Montana 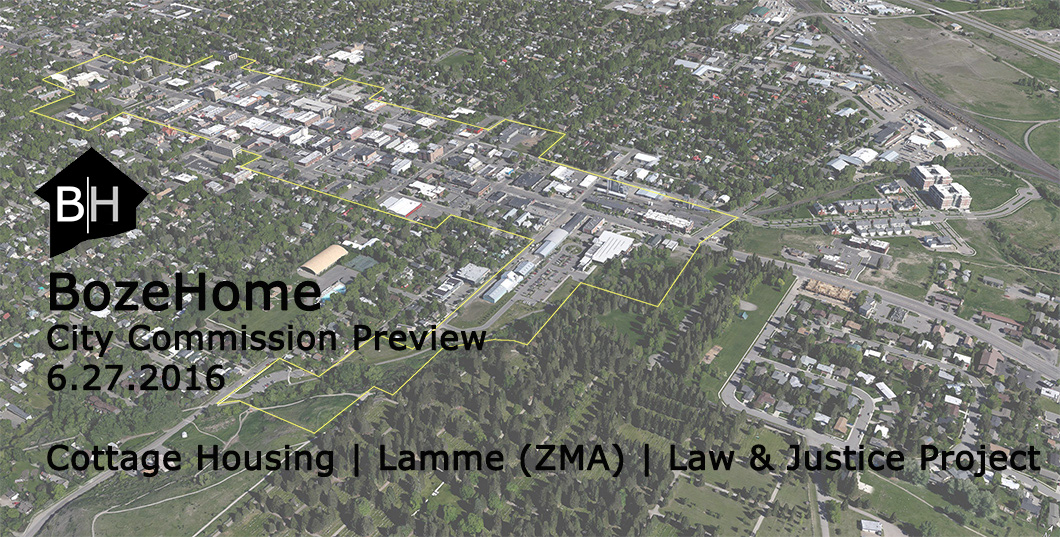 Cottage Housing | The Birth of the Tiny Home in Bozeman?

“The City has been working on the issues of infill development and affordable housing for many years. Recently, the City adopted new regulations for affordable housing. As part of that process, the City Commission directed the creation of an option for innovative housing. The innovative housing option is to encourage the creation of affordable housing within developments. The increased intensity of use and flexibility can create challenges due to tight conditions. Attention to detail during the design and execution of a cottage housing development is essential. Cottage housing requires site innovation. The allowed small scale and small lot sizes provide a style of housing not found in standard subdivision design. The design standards address details not normally seen during a subdivision review. Not all sites are able to successfully meet cottage housing standards. Provision of infrastructure is a design constraint.”

Lamme Street Zone Map Amendment (ZMA) requesting amendment of the City Zoning Map for 5.1 acres (including streets and alleys) from R-4 (High-Density Residential) district to R-5 (Residential Mixed-Use High Density) district. The Bozeman Code Update is a City-wide effort to generally revise and update the City’s development code. In association with the phase one code amendments certain zoning changes were necessary. The Lamme Street ZMA is a part of the Midtown ZMA and text amendments that were finally adopted on April 25, 2016, and became effective on June 8, 2016, after considerable public input. However, based on a public comment the Commission removed three areas within the Midtown ZMA area from the revised and adopted zoning map. All areas removed from the revised zoning map were proposed to be changed to R-5.

As designed, the Project consists of two separate buildings constructed on the L&J campus; a Courts building and a law enforcement building (see attached site plan). The total estimated square footage for both buildings is 181,658.

Ownership Structure | If all questions are approved by voters, the City and County would jointly own the Project as condominiums, which is the form of property ownership chosen by the County and City for the joint 911 Center/Fire Station 3 property. Under this form of ownership, each party would own their condominium unit (the areas of the buildings exclusively occupied by that party), plus an undivided property interest in the common elements, expressed as a percentage. It is anticipated the City and County would each have a 50% voting interest in the condominium’s common elements. The condominium declaration will include a dispute resolution mechanism to resolve any deadlocks.

3.      Resolution 4697, Authorizing Participation in the Board of Investments of the State of Montana Short Term Investment Pool and Authorizing the Execution and Delivery of documents Related Thereto (Clark)

6.      Authorize the Mayor to Execute a Conveyance of Vacated Street at East Alderson to Bozeman School District Number 7 (Cooper)

8.      Authorize the City Manager to Sign a Professional Services Agreement with AE2S for Electrical Instrumentation and Programming for the 2016 Burrup Lift Station Improvements Project (Gamradt)

9.      Authorize the City Manager to Sign a Professional Services Agreement with OmniEarth for the Development of a Water Conservation Plus Product for Education and Outreach(Leoniak)

11.  Authorize the City Manager to Sign an Amendment to the Professional Services Agreement with Tetra Tech for a Landfill Gas / Soil Vapor Extraction System at the Story Mill Landfill(Hixson)

12.  Authorize the City Manager to Sign Amendment Number 2 to Task Order Number 3 for the Professional Services Agreement with DOWL for Right-of-Way Acquisition for the North 7th Avenue Lighting and Sidewalk Project (Fine)

13.  Authorize the City Manager to Sign the Memorandum of Agreement and Certificate of Acceptance for the Purchase of Easements, Temporary Construction Easements, and Right-of-Way for the Construction of Improvements to Baxter Lane, Parcel 8 (Hixson)

14.  Authorize the City Manager to Sign the First Addendum to the Dark Fiber Lease Agreement with Bozeman Fiber for a Deadline Extension (Fine/McMahan)

15.  Approve a Beer and Wine License for Caspian of Bozeman, Montana to Sell Beer and Wine at 34 North Bozeman Avenue (Rosenberry)