Inflation is Just One of Rates’ Multiple Personalities

It used to be that higher inflation meant higher rates, period. That changed abruptly beginning in 2011. Inflation moved higher and rates plummeted. Many investors were puzzled at first, but most grew to accept the new reality. Now, that reality might be changing.

The breakdown in the long-standing correlation between rates and inflation is best viewed as a hiatus brought on by global financial panic and unconventional monetary policy.  It’s impossible to truly separate rates and inflation because higher inflation will always result in higher rates, all other things being equal.

When all other things are not equal, inflation’s impact on rates can be overshadowed.  From 2011-2016 it was vastly overshadowed! 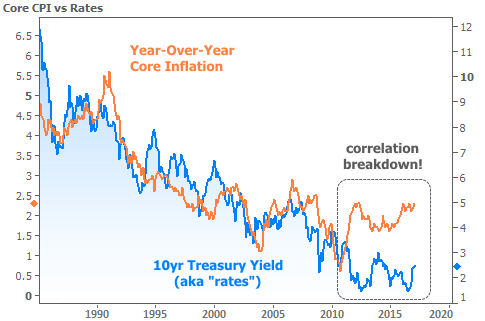 As central banks continue trying to wind down their bond buying programs and the threat of a European market collapse subsides, inflation has quickly found its seat at the table.  The US presidential election merely served as the dinner bell.  It forced the question: what if growth and inflation increase from here?

If Trump’s policies could indeed stimulate an already relatively healthy economy with official inflation figures running over 2% year-over-year, then long-term interest rates had no businessbeing under 2%.  Many investors quickly became concerned that a decades-long trend toward lower inflation and rates was at an end. 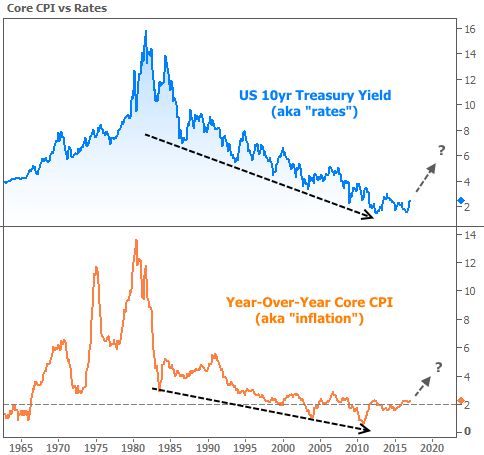 Those concerns are being compounded by their own implications.  If inflation is indeed turning a corner, then the Fed may need to hike rates more quickly.  Indeed the Fed said as much in December, and you can see the reaction in nominal rates (the non-inflation-related component of rates represented by the red line in the following chart). 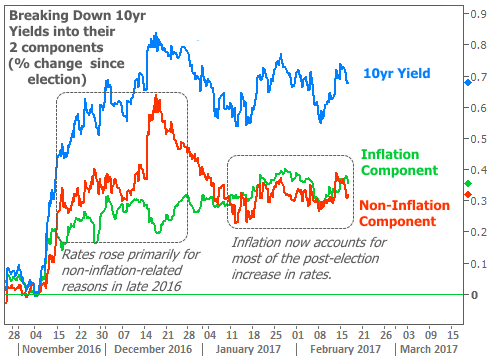 In the new year, nominal rates have pulled back somewhat (red line, above), but inflation expectations (the green line) remain elevated.  That’s why rates have been sideways for the past few months.  They’re waiting to see which of the two personalities will be in control going forward.

Trying to pick a winner is complicated because the two are so interconnected.  We got fresh evidence of that this week when the Consumer Price Index–an inflation metric–rose more than expected.  It led investors to increase bets on a Fed rate hike at the upcoming meeting, which in turn put some upward pressure on rates on Wednesday morning (the sharp spike in the orange line in the chart below). 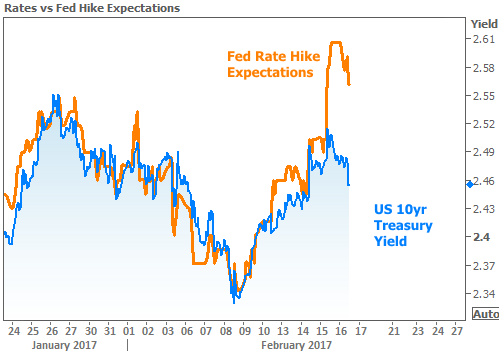 Beyond inflation and nominal rates, there’s a popular misconception that stock prices drive interest rates.  It’s popular because it’s partially true!  The stock market is indeed a minor player in the bond market’s multiple personality disorder, but this particular personality never gets full control.  Correlation is easiest to see over the shortest time frames, and completely vanishes in the bigger picture. 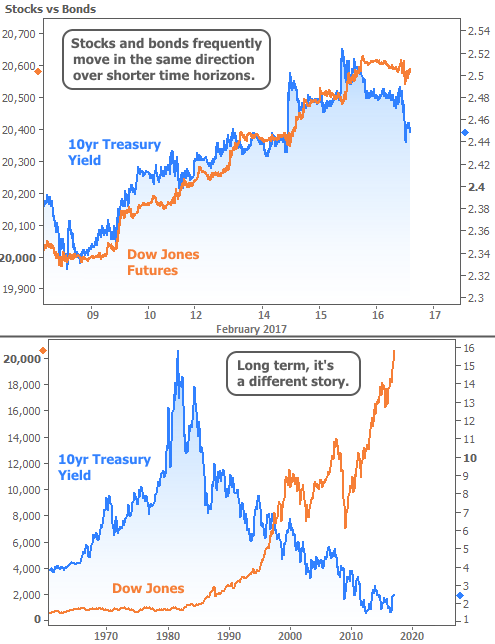 In housing-specific data this week, Builder Sentiment pulled back slightly, but remained near post-crisis highs according to the NAHB’s Housing Market Index. 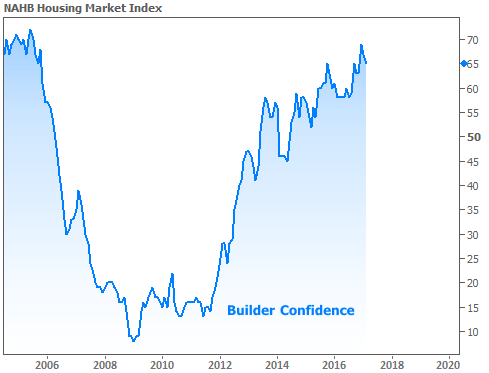 On a similar note, Housing Starts fell slightly but remained in strong shape overall.  The same data showed Building Permits making some encouraging gains, hitting the best levels in more than a year. 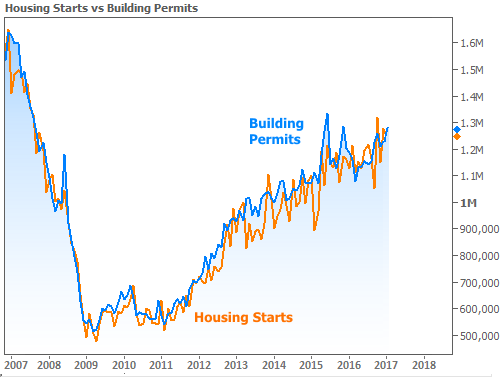 We will continue to watch these rates, and it’s relationship to Bozeman’s Real Estate Market. Feel free to reach out anytime for more information on market conditions. Nolan Campbell – B/H

Founder & Curator Bozehome, and is a licensed Realtor with PureWest Christie’s International Real Estate– Specializing in environmentally friendly multi-family and commercial real estate investments and development, with an emphasis on urban renewal and affordable housing.

For more information on lending please contact on of our trusted lenders Leslie Largay- Loan Officer, Prime Mortgage Lending, Inc., Cell 406.360.2906 or email her at llargay@goprime.com