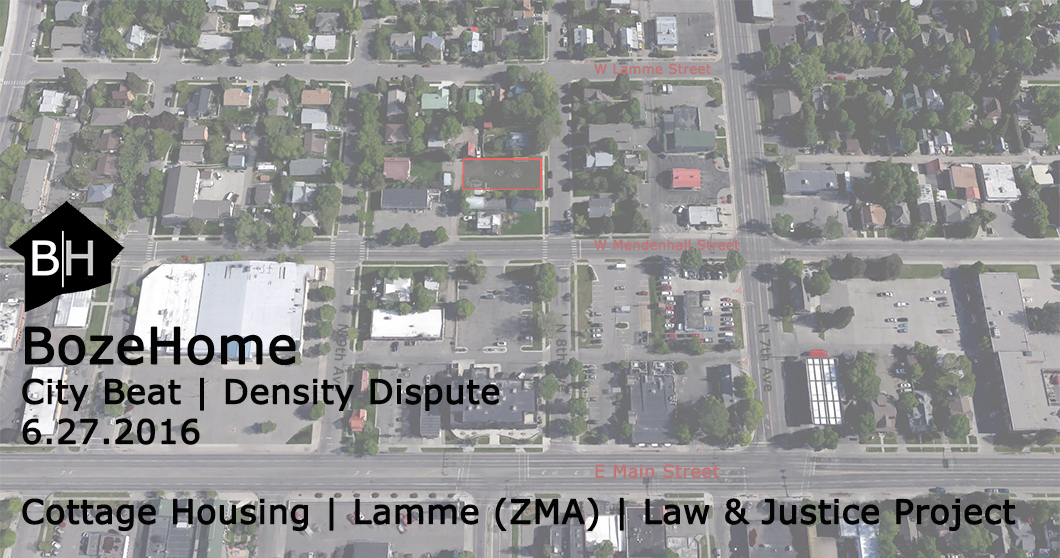 During Monday night’s Bozeman City Commission meeting, a zoning map amendment for a neighborhood near downtown was on the agenda for the second time in 11 weeks and again drew lots of criticism from the neighborhood.

After the commission voted in December to not change neighborhood zoning in the area of North 7th/Midtown and then spun 180 degrees to bring it forward for a vote in April, the city commission took up the issue of rezoning an area between West Lamme Street and West Mendenhall Street on Monday night.  Some members of the commission and City Planner Tom Rogers clearly hoped the second vote would be the charm.

Since the beginning of the year, four areas south of Peach/Durston have been pushed by Rogers for higher density zoning, titled R-5, a new designation which is still being defined, but generally allows for more lot coverage, taller buildings, and commercial operations on the entry level.   In April, the commission voted not to alter any residential zoning areas in that area.  But in May, Mayor Carson Taylor was encouraged in private communications with the planner to again put the item on the commission agenda for another vote.

The matter was aptly summarized by one of more than a dozen visiting members of the neighborhood, Michael Tucker, who said during public comment, “Zoning gives us predictability.  When you change zoning mid-stream, you undermine my due diligence.  I feel the neighborhood is thriving.  I also find disturbing that a vote has already taken place.  Are we to expect that from every city commission decision?”

Mayor Taylor would later take responsibility for the re-vote.  He also said, “I hear the argument regarding ‘predictability,’ I hear that.  The reality is, sometimes we do change the zoning.”  Despite the neighbors spoken concerns that an existing, “walk-able” neighborhood for working members of the community was being “zoned out” in favor of developers and more expensive homes, Taylor said, “I am voting in favor of this ZMA because I believe it’s going to make the neighborhood better.”

Instead of faltering in opposition to the vote after April, the neighborhood rallied.  They acquired more than 25% of the property owners’ signatures for a formal, state-qualified “protest” of a zoning map amendment.  By state law, then, the item would need four commissioners’ votes to pass.

Commissioner Chris Mehl thanked the public for their input and said their level of participation made him proud.  He also said the area considered for re-zoning has  “been R-4 for 42 years.  This zoning district is almost as old as I am.”  Since the community hasn’t provided the higher density zoning that the City wants, Mehl stated he’d be voting in favor of the amendment.  He said, “I hope that you understand I respect your participation, even when I disagree with you.”

Commissioner Cyndy Andrus was, however, moved by the formal protest: “I, too, heard you.  I have been encouraged to change my vote.”  She mentioned that she may support higher density re-zoning in areas of Bozeman in the future, but decided, “I am going to vote against this amendment.”

Commissioner I-Ho Pomeroy expressed her support of higher density neighborhoods as well and also said she wouldn’t support this amendment.

Also on Monday night, the Bozeman Police Department, via Chief Steve Crawford, presented an annual report and took questions from the commission.

The Police Department distributed a tri-fold booklet in advance of the 2015 Bozeman Police Department annual report and Crawford’s presentation drew strongly from the document.  Under the ‘Statistics’ heading in the booklet, a table illustrated the major crime incident rate (per 1,000 residents) for Bozeman and five other cities in Montana:  Kalispell, 69.5; Helena, 50.2; Missoula, 49.2; Billings, 47.1; Bozeman, 29.2; Great Falls, 24.0.

During Q&A, Crawford explained that the numbers represented for Great Falls may be low.

Upon request from Commissioner Jeff Krauss for information about the police force’s gender mix, Crawford said there are “65 officers (in all), 3 female officers on-staff, and 1 more has been hired.”