The word solstice derives from Latin, solstitium, meaning ‘the Sun stands still’. It’s also commonly described as the day the Sun turns around. Various cultures and religions exalt this day because the Sun’s path across the sky climbs again, following a six-month decline in daylight hours (in the northern hemisphere). If one needs help understanding its importance to humans, imagine a time before snowbird flights to Cabo, before grocery stores with year-round produce, or before the wide availability of central heating. 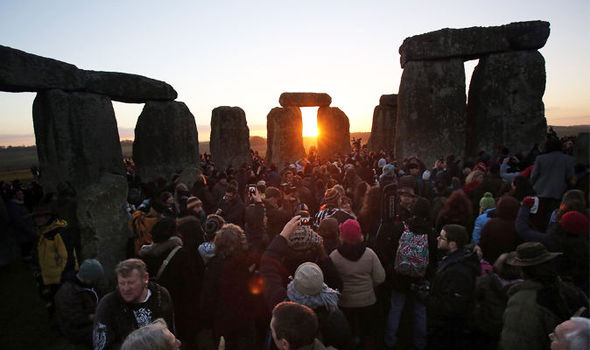 It’s a day for celebration, as demonstrated by the roughly 5,000 people who traveled today to the remote rural setting of Stonehenge. The ancient ring of massive stones lies on a grassy low hill in southern England,
where archaeologists found early human constructions dating back some 11,000 years.

Experts believe Stonehenge served primarily as a burial ground. The stone monoliths (excavated from a quarry 25 miles away) they arranged in a plain circle with primary azimuths directed from center and toward the point where the Sun, on the day of the winter and summer solstices, met the horizon. For these early people, Stonehenge stands as proof of the solstices’ sacred power.

If you prefer the specifics of contemporary science to natural history, the winter solstice this year occurred at 3:44 a.m., MDT. Some may find this a surprise, but the earliest sunset doesn’t fall on the winter solstice; it passed several days ago. The winter solstice refers, again, to the shortest day of the year, not the earliest sunset. The two events don’t occur simultaneously because, first, the Earth’s orbit around the Sun follows an ellipse, second, watches don’t tell time in the same manner as a sundial, and third, a solar day is not beholden to the rule of an exact 24 hours, as defines a calendar day.

When you look outside on this cold December day, picture yourself far in the past, when people saw this annual event as an encouraging sign in the deepest cellar of winter. Summer will return. Now, picture ahead to our own forthcoming season of green with gardens to plant and the promise of long warm days filled with sunshine. Lastly, remember that on this very day one half of the world is making the turn toward the dark.

If your head is spinning, then you’re doing it right.  It’s the solstice.

“Laughter is the sun that drives winter from the human face.”  — Victor Hugo